I am sacrificing for you… make something of yourself!

If you are much like me when you hear the name Nevil Shed, you may 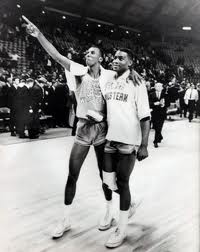 not know anything about the person; you might even think he is an Englishman, or at least of Caucasian decent; right?  Perhaps this is a common response as you will see.  The Nevil Shed I now know is 6’ 8” tall, a talented basketball player, and was recruited by over 100 collegiate basketball teams.  These were all on full ride scholarships offered during the 1960’s.

Sadly, Nevil soon learned the offers had come from coaches who were unaware he was black.  Of the 100 plus letters piling up on his kitchen table with more coming in daily; there were only 12 schools that would even consider a “colored” man on their team!

This wasn’t necessarily shocking to Nevil or his parents; they were living during an era of intense discrimination.  Nevil insisted with his mother that he would go to some of the colleges which were offering him scholarships, even though they had misinterpreted his color.  She didn’t want him too, but he did anyway.

What Nevil experienced next brought home how horrible intolerance was in other parts of the country.  Electing one night to go to a movie, Nevil approached the ticket booth with everyone else.  As he handed over his dollar for entrance the employee pushed it back to him.  Unaware there was a separate entrance for colored people, he innocently handed the dollar back.  It was pushed back again with no communication whatsoever.  Then suddenly someone grabbed Nevil by the arm, showing him where “his” entrance was.

Nevil walked down a dark scary alley to dreary doorway.  There he was granted access, but found he had a special location, away from other guests, which was upstairs.  Nevil wanted popcorn and a drink to enjoy during the movie, yet he was afraid of what may be put in his food.  While approaching the drinking fountain he clearly witnessed another bias toward him, placed on the wall were two fountains; one for whites, and the other for colored people.

His story of becoming a member of the first team to win the NCAA national basketball championship, with an all black starting lineup, in 1966 I will save for a different story.  What I want to share with you is the story Nevil shared with me last night.  This is what started him on his path of success.

Nevil’s father worked in a train station helping traveling passengers disembark from passenger cars and loaded their luggage.  One day Nevil went to work with his father and there witnessed some of the pressures his father had to put up with at work.

Those who reached out their hand for assistance or those who required help with baggage referred to Nevil’s father as “boy.”  This troubled Nevil deeply as he knew the term wasn’t being used respectfully toward his dad.  On one occasion Nevil assisted his father by placing suitcases in line on the floor; this was done to position them out of harms way, and allow easy access for the travelers.

One passenger took his belongings and moved them a few feet from where Nevil placed them as the train was leaving.  When the train went by, the steam from the engine sprayed all over the man’s luggage as it proceeded down the tracks.  This angered the man terribly.  He immediately yelled at Nevil’s father to correct the wrong.  Nevil’s dad hurried over, knowing the fault lay in this mans actions, and apologized while cleaning the bags with his handkerchief.

To Nevil’s surprise the wife of the man who had moved his own luggage commented “It is no ones fault but yours, you placed the bags in the way.”  Nevil remembers the man arguing with his wife as he continued to belittle his father by using “boy” throughout his remarks.

That night, at home, Nevil who felt ashamed of his father, not understanding why he wouldn’t stand up for himself, yelled at him commenting “Why don’t you stick up for yourself!”  To Nevil’s surprise the next thing he remembered was that he was up against the wall with his father pushing him in the upper chest.

“I will not have you act like this.  I put food in your stomach (pointing at Nevil’s midsection), clothes on your back (pointing at his chest), and a roof over your head (waving his hand over Nevil’s head) with this job!  All I need from you is to make something of yourself so you don’t have to ever find yourself in my position.”

All 6’ 8” of this teenager found himself humbled and dedicated to honoring the gift his father so graciously gave; his all!  From that moment on Nevil never looked back, he took the talents God blessed him with, and the love of his parents, to became a major contributor and success in life.  Someone his father truly was proud of!

This father’s son enabled our current athletic world (perhaps all society) to benefit from the equality we enjoy today.  He did this while suffering through tremendous trials!  Nevil must carry his father’s spirit.

To fathers and mothers all over this beautiful world; those who carry enough love in their heart too further the lives of their children, thank you.  To my mother and father, thank you for what you have given me.  And too my children, my hope is I, with your mother, have opened doors of opportunity for you.  Now go out and make a difference in our world!

This entry was posted in Stories from people I meet and tagged discrimination, equality, sports, understanding. Bookmark the permalink.

1 Response to I am sacrificing for you… make something of yourself!