Best day of my life… 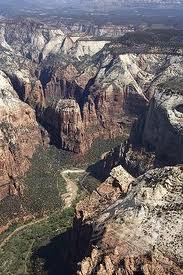 I was given an opportunity to attend a seminar facilitated by Jim Ferrell of The Arbinger Institute which was provided to me by the Sutherland Institute.  I have always believed there is at least one thing we can learn from every teaching environment; no matter the subject.  This seminar proved to be no different.  In fact there were many new ideas I took away as ideals to improve myself.  One “life lesson” I learned is a story I want to share with you on this post.  It is a true story limited by my memory as told by Jim.

Mr Campbell had been a Park Ranger in Zions National Park for nearly 20 years.  His family lived just outside the park in Springdale Utah, a rural community supported by the 5 million visitors who come to see the beauty of these majestic red rock mountains every year.

The Campbell’s home was just off Zion Park Blvd, across the street from the Virgin River Gorge with the river running about 100 feet below the elevation of the street.  The Campbell’s driveway was directly across the street, and if not careful, guests who came to visit could meet with certain disaster by simply enjoying the scenery and ignoring the potential danger.

Mr Campbell lived a conservative life believing it was better to pay cash for purchases whenever possible.  Living by this philosophy meant the Campbell’s had never owned a new car.  It seemed their savings were typically “just short” of the money needed to buy the new car.  This wouldn’t hold true for much longer as the family had elected to save for the day when they could buy a brand new Plymouth Cranbrook.

In 1952 the day finally came when this new beauty was purchased and brought home.  Now the family could drive around together enjoying the niceties of having a new car.  They had been using an older truck as their main transportation which met their needs, but this was different.  A car drove smoother and everyone fit more comfortably when the entire family wanted to go somewhere together.

After a week of having the car around to enjoy, Mr. Campbell’s 16 year old son Ryan, mustered enough courage to ask if he could “take the car” and show it off to a young lady he wanted to impress.  “Certainly” responded this wonderful father while hoping inside that his son had learned enough to be responsible with the car.  “Please be careful and have fun son.”  I will Dad, thank you!

Ryan grabbed the keys off the table were Mr Campbell was reading his paper and ran out to the car.  Wow, he thought to himself enjoying that “new car” smell and listening to the purr of the motor as he started the engine.  Ryan reached over to set the radio to a station he felt both he and his lady would enjoy when he noticed the gas tank was nearly empty.  He knew he didn’t have any money for gas and wondered if he could ask his father for that too.  Oh, what the heck he thought to himself as he raced out of the car to see.

Hey Dad, the car is nearly empty and I don’t have the cash.  Can I…  Mr Campbell interrupting Ryan while reaching into his pocket said, yes, and fill it up please.  Oh, this is the best day ever Dad!  Thank you again.  With money in hand and feeling as if he were walking on clouds, Ryan turned around singing to himself the exact same song that had being playing on the radio just moments ago.

To his surprise when he got to the place in the driveway where he had left the car; it wasn’t there.  Shocked, Ryan looked around now very anxious about where it could be.  He knew there hadn’t been enough time for someone to take it, yet it wasn’t there.  The grade of the driveway was such that there was a gentle slope toward the main road.  He nervously tried to remember if he had put the cars transmission back in park?

Not entirely sure, he ran to the end of the driveway and then across the street to see if by chance the car had rolled down the driveway and into the river below.  Shaking nervously, not wanting to find what he felt may be the only reason the car was gone, he peered over the edge.  There it was, smashed on the rocks below and partially in the river.  Ryan fell to his knees crying out loud as he knew what this car had meant to his Dad, his family, and how long they had saved for this.

After what seemed to be forever, Ryan stood back up knowing he had to tell his Dad.  What will he do?  What would I do?  Ryan thought as if he were the father placed in this circumstance.  Cautiously Ryan walked back into their home as Mr Campbell lowered his paper asking, What’s up now?  Dad, I must have left the car in gear when I came in for gas money.  It has rolled down the driveway and into the river.

Mr Campbell calmly raised the paper back up as if he were reading it.  Dad, did you hear me?  The car is ruined.  Mr Campbell reached up to the corner of the paper to turn from the page he was reading, then slowly lowered the paper so he could see Ryan.  “Well, I guess you will have to take the truck then.”

Ryan had only gotten about a block away from home when he was overtaken by emotion.  He pulled over to the side of the road sobbing uncontrollably placing his face in his hands.  He thought, “My Dad loves me more than he loves the car.”  On what became the worst day of Ryan’s life, his Dad made him feel better; not worse.

Ryan’s father knew his son would learn everything he needed to from the pain of having made a simple mistake.  He knew the car was only an object, and that his son was someone who meant a lot to him.  Mr Campbell treated his son as a person; a person he loved.  One he could feel for while placing himself in their position.

This wonderful story highlighted for me areas I know I can improve in personally.  Not only as a father, but as a person in relationship with many fellow human beings.  We may all have times in our lives we wish we could have responded as Mr Campbell did, and if we didn’t; we certainly can in the future.

What I learned, and hope I can maintain, is that we need to treat those we love as we would want to be treated.  Next time a difficult situation comes up, I pray that I can take the time to put myself in the others position; then respond with wisdom and love.  Thank you Mr Campbell for your example, and Jim for telling me this story!