My faith maintains me… 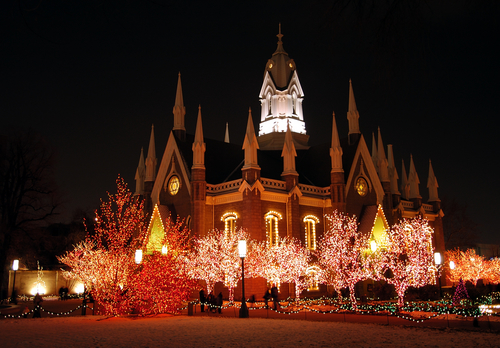 A dear friend of mine was struggling with what seemed to be a series of unfortunate events in his life.  These trials had striped him of hope and left him with little to no faith at all.  In an effort to help, I offered that we go on a walk and talk through his situation.

As we were walking down the street we began approaching a church which was beautifully lighted for the Holiday’s.  He turned and asked, “How can anyone believe in God?”  Knowing he had been faithful, I started to think how I would reply.  At the time I held a prayer in my heart hoping I could assist, even in some small way.

Just as I was opening my mouth to respond, an older woman, who seemed to be down on her luck, turned on the sidewalk in front of us and began walking our way.  There was a certain light in her countenance which was undeniable.  It seemed to us as though she had been inside the church, perhaps praying.  My friend said, as he was making judgment based on his first impression, “Look at her, she has no reason at all to believe and does.”

As she approached he stopped her to ask, How do you maintain your faith?  She said, I’m not sure what you are asking.  Well, not intending to be offensive, you seem to be down on your luck, yet you believe?  A big smile immediately radiated from her face as her eyes filled with a simmering glow.  She was looking directly into his soul.  Uncomfortable, my friend began to share with her some of what he was going through.

She listened with great compassion, suggesting some of what had happened in her life which made my friends circumstance seem like a walk in the park.  At the conclusion of their exchange, he asked, How do you maintain your faith with what you are going through?  Not believing she could radiate as she had earlier, she did again with even greater brilliance.  It was as if we were each looking upon and angel.

Her response is something I will never forget and one that altered the coarse of my friends condition.  Son, you clearly don’t understand at all.  It isn’t a matter of me maintaining my faith; it is my faith that maintains me!”

This entry was posted in From friends and tagged belief, compassion, faith, understanding. Bookmark the permalink.