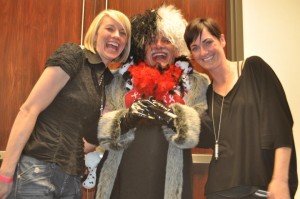 I had a beautiful life experience while visiting with a dear friend of mine, Dan Densley.  We were talking about an upcoming event he was participating in, “Bras for a Cause.”  Our conversation reminded me of the time I had spoken with my friend Heidi Benson, a military mother, who shared with me her feelings about her son’s service.

Dan was scheduled to dance later that day as a female in drag, to raise money for cancer research.  Dan is a middle aged man who has maintained good health and is active in “staying fit.”  With that said, he was aware that age had precluded him from being “eye candy” like some of the other dancers. 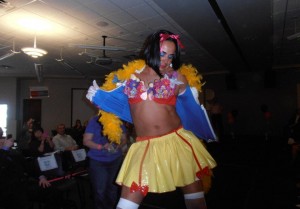 Oddly enough, a few days earlier, I had spoken to a different friend, Robert Lopez, who was scheduled to dance with Dan.  As Robert and I visited, we laughed about his annual request to participate in this event.  Robert is a young, dark, handsome hardbody, who not only receives double takes everywhere he goes, but he is completely oblivious to the female gawkers!

I reminded him that we had used him to attract females on a boat in Lake Powell.  Robert is one of the kindest, honestly humble men I have met.  Part of his attraction is his sincerity of being unaware that he could be used as a “Mister Atlas” model; truly!  Most of the dancers participate willingly, to support the cause but really don’t enjoy the attention.

Not all dancers are the same however, there is one who longs for this kind of exposure and is active in seeing that the pictures taken make it to large audiences.  This individual actually exercises back stage by doing repetitive push ups and sit ups to “pump up” his muscles.

While Dan and I spoke, I teased him about having to stand next to Robert and the “pumped up bodies” assuring Dan not many eyes would be on him; we laughed.  I complimented Dan for being such a good sport in doing something that requires a tremendous amount of bravery.  We laughed as he told me that he was in it for fun; I knew differently.

Dan’s dear wife DeAnn is currently undergoing chemo therapy for cancer.  She is a wonderfully kind and loving person who has given of herself her whole life.  DeAnn is beloved.  She is fighting her disease with all her heart.  Her example is inspiring to all who know her.  I asked Dan if he would be given a chance to speak at the event?  He said he didn’t want to.  I told him I admired his desire to participate.

He then said, “Jaren, I am doing this to see that they find a cure for cancer” with eyes moving toward the floor he began to cry.  Raising his hand to wipe away the tears as they slowly trickled down his cheeks, he said, “I would dance naked if necessary.”  Now, perhaps feeling slightly embarrassed about his emotion, Dan spoke softly and in a shaky voice said, “I would do anything to see that DeAnn gets better!”

As Dan and I continued with our visit, I quickly learned of his commitment to his “soul mate” and that here is nothing he wouldn’t do to help.  It was inspiring for me to witness first hand this deep love Dan and DeAnn share.  Words can’t express how I felt, knowing life is filled with relationships that are bound as one; with each partner feeling the others need.

I then saw Dan a few days later after his dancing charade and asked him how it went?  “Fine” with a smile on his face as if to say, you know why I did it!  I wondered if he had a chance to verbalize his feelings so I asked, did you get to speak?  No, you know I could’t anyway.  How did you do? I asked, knowing that he was up against younger hardbodies which included the show off.  “Oddly enough, I raised the most money, go figure!”

This too taught me of the importance of doing things in life with humility and pure intent.  Dan wasn’t there to do anything other than to accomplish one goal; raise money to help his wife and others who are struggling with this disease.

Dan, thank you for your dedication and love of life.  Thank you for being willing to do what it takes to see that others are taken care of.  You are an amazing example to all who know you!  May God Bless you to realize the desires of your heart and may DeAnn be blessed to know of your love!

This entry was posted in Stories from people I meet and tagged bras for a cause, cancer, dan densley, dedication, humility, love, soul mates. Bookmark the permalink.