It was early spring.  The warming weather began breaking up the winter freeze creating patches of mud which proved to be difficult for our team of horses to pull their heavy loads.  Now early in the afternoon; this was our third trip of the day.  The wagon wheels seemed to sink slightly lower than the previous trips we had made, yet all appeared to be okay.  We backed the wagon down the slight grade which allowed for our wagon bed height to match the dock of the storage shed.

With the wagon loaded, we assumed our positions and prepared for the horses to move.  I held the reins and was making my final observations before we pulled out.  All is clear, I gently shook my hands while calling out my command, walk on while making a popping sound by pulling my tongue away from the roof of my mouth.

The horses bore down hard against their harnesses.  I could hear the leather tighten, the buckles strain and the horses groan.  I looked around, we didn’t move at all?  The wagon itself seemed to shake but no movement on the ground.  I quickly pulled back with a soft command, whoa girls, as I was thinking I needed to make further observations.

I jumped down and noticed we had sunk even further into the mud, in fact, the top of the inner wheel just where the spoke ties in was covered in this deep thick mud.  All I could think was it would only get worse as the mud continued to warm and that this was our last trip of the day.

I jumped back on thinking if we rocked a little it might free up the wheels.  Walk on, I yelled out as I shook the reins suggesting we move forward.  Again, with great effort the horses pulled but to no avail, not even with our attempts to rock the wagon.  I sat wondering to myself whether or not to unload or if I had any other options.  Just then I remembered a dear friend who had a large team of draft horses who I felt could pull this wagon out and to my destination on time.

I solicited for his help which he seemed excited to provide.  As he approached my wagon with his team, I was surprised to see he was bringing his smallest team.  I thought I had been clear on my circumstance and had even told him which team I was using hoping he would bring his largest horses.  Oh well, I thought to myself, I guess we can get them after he learns they won’t be able to help.

He backed in his team, put on the harnesses, placed the bits and strung the reins.  Then to my surprise, he moved to the side and simply stood there not saying a word.  His horses settled in rolling the bits around in their mouths while occasionally leaning against the harness as if to be testing the weight.  As they did, I could see they were simply getting the feel of what it was they were to pull.  Their energy seemed to pick up and I could see excitement in their eyes as each of them felt the load moving ever so slightly.

I wasn’t the only one watching intently, my friend was also making his 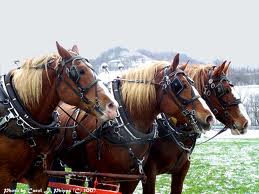 observations on how they were acting.  Just at the exact moment these horses readiness was reaching its peak; my friend calmly said, walk on girls.  To my utter amazement they all hunkered down, leaned into the harnesses and pulled in perfect form.  Not only did the wagon move but it was done with what appeared to be very little effort.

Now embarrassed to think that I had nearly suggested his small team wouldn’t work, all I could say was, how on earth were you able to do that with this small team?  His answer, which not only gave me the reason but taught me a life lesson which I will never forget was, they have never been taught there are things in this world they couldn’t move…

How often do we stifle the growth of another by limiting what they are capable of doing through imposing our beliefs on them?  The team of horses stuck in the mud had the power to pull the wagon out.  The only difference was they had been placed in prior circumstances were they couldn’t succeed.  When the load got heavy, they inadvertently felt this was one of those times giving up just at the tipping point of success.

How often is our own growth limited by those very same feelings?  Simply remember how intriguing it is to witness the insane accomplishments of individuals who are succeeding in everything their hearts allow them to do!

PS This is true story (written in my own words) as shared with me yesterday by Mr. Jim Hicks (a true legendary horseman).  The friend in the story was Ray Hunt’s father who had three teams of horses, one large, a medium and a small.  His small team did the feat the larger team couldn’t; simply because their trainer allowed them to believe they could…

This entry was posted in From friends and tagged accomplishment, belief, can do spirit, heavy load, i can do anything. Bookmark the permalink.