How to save the life of an addict? 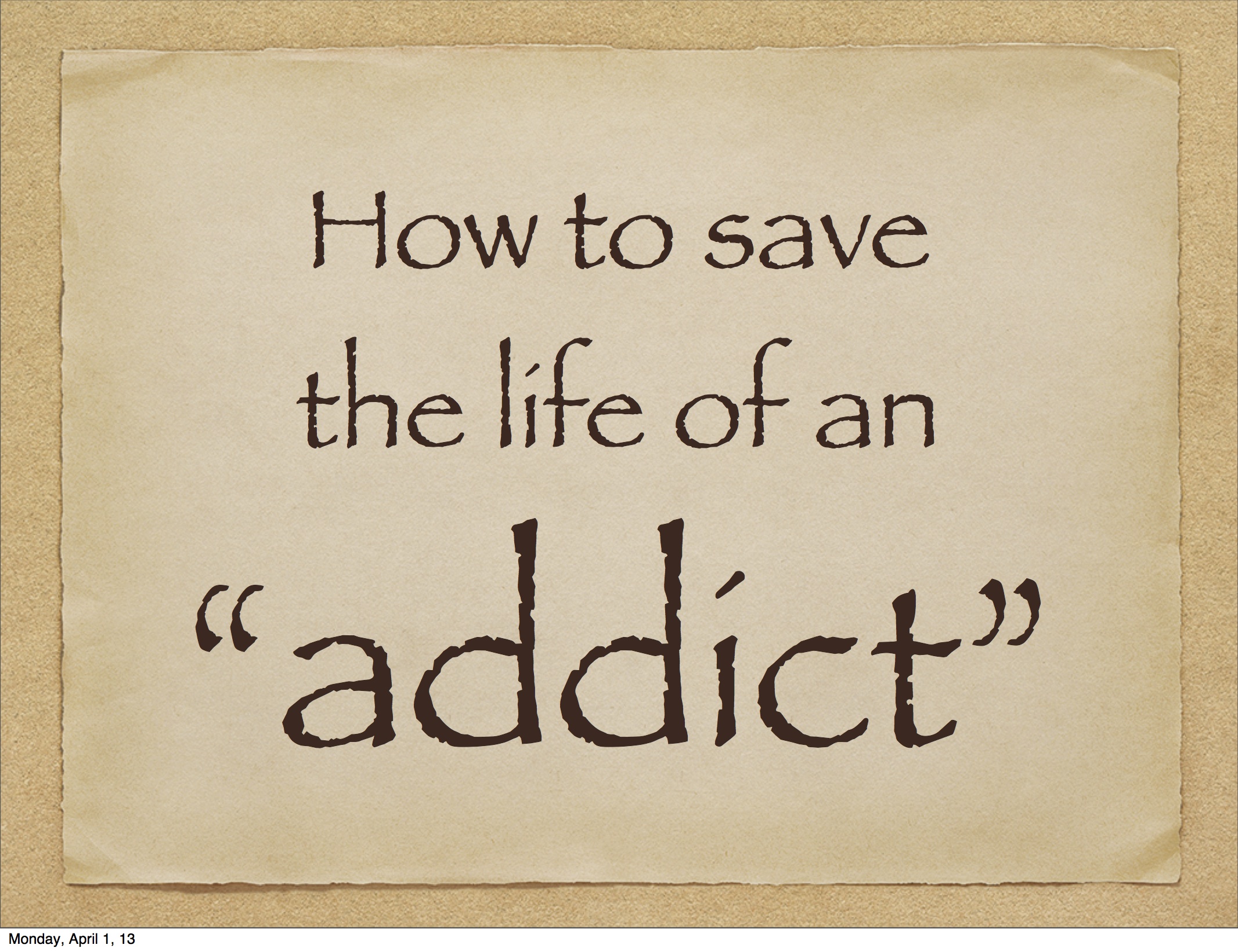 It was a cold night in late fall, just about that time of year when nights change rains into wintery snow.  Mary, a teenage daughter was home with an older brother Alex who had suffered in and out of the disease of addiction.  This was a low point in his life.  Alex had enjoyed sobriety less than a month earlier, but was now finding “satisfaction” in participating yet once again.

Mary was somewhat aware of what Alex was doing.  She had a lot on her mind as she was catching up on homework while thinking about a friend who struggled with her family relations.  An unusual quite in the home caught her attention as she wondered what he was doing upstairs.  His bedroom and bath were downstairs so he really had no need to be in anyones room on the second level.

Nervous he would be offended with his younger sister questioning his actions; she hesitated.  Missing the opportunity, she sat still listening, trying to determine what was going on.  She could hear things moving around in her parents room and then caught him passing by her quickly as if he were hiding something.  Her instinct again was to question, yet she hesitated for a second time.

Mary then quickly ran upstairs to see what may have been disturbed.  You see, Alex had stolen nearly everything of value from the home to pawn the family possessions for drugs.  She noticed her fathers iPad was missing knowing where it was from just having used it.  She hurried downstairs to see why he had taken it.  Thinking on the way that perhaps he would try to sell it, and what selling it might mean.  As she opened the door to his bedroom she caught him off guard.  He looked at her only briefly, then frustrated he ran to the bedroom window and climbed outside hurrying into the yard.

Mary wasn’t dressed for the outdoors, particularly this night with cold in the air.  She was wearing a dress with no shoes, and unfortunately had left her phone upstairs with her homework.  Nonetheless, she didn’t hesitate a third time and rushed to the window well yelling Alex, Alex come on?

This only made him move more quickly as he began running into the neighborhood.  Mary, being an athlete and feeling secure that she would be able to stay with him, negotiated herself outside and began her pursuit.  Each ran down the street dodging in and out of hiding places.  The chase continued for a couple miles.  Alex had to be impressed with the dedication of his younger sister and in her ability to stay with him.

Finally, the two came on a commercial district which provided significantly better hiding places than the neighborhood had.  Alex was able to secure a location unknown to his follower and sat silently.  Mary anxious to help her brother, scared to death, and now beginning to feel the cold; stood alone in an empty parking lot crying in complete disbelief.

Alex, Alex, Alex she yelled out in a shaky voice, followed by a, “Seriously?  You are leaving me here alone?”  All she could think was, how on earth could someone she held as an idol (one known as the protective older brother) leave her in this condition alone?  He sat quietly hiding, able to see and hear her; wondering himself how he had reached a state in life where he could leave her alone like this, but felt no inner power to do anything about it?

He remained quietly in his position until she left.  Mary, after several minutes gave into the fact her hero didn’t care and began her long, cold, voyage home.  Alex unfortunately pawned the iPad that night and fulfilled his craving; buying another fix with the fraction of value he was paid for the iPad.

The family learning about what happened was shocked but not in complete disbelief.  They found themselves again in a position of feeling that there was little if anything they could do to help.  Alex spent the night with friends to find himself awaking with the most disturbing feelings he had ever felt in his entire life.  As he arose, his soul was filled with the same painful disbelief Mary carried in her heart her and which kept her from sleep all night long.  Holding his head in his hands he thought: How could I have done this to someone who means so much to me?  This emotion ran through his mind over and over again creating what seemed like a river of endless tears running down his face.

This however, is the moment Alex’s life changed completely.  He now had found an internal desire, one he had never felt before; a feeling of longing to make the changes necessary to live without the burden of this terrible disease.  Alex willingly entered a treatment program and was drug free for nearly 120 days.  Has had one setback, but the rallying forces of that night enabled the family to reunite his spirit.  I understand he now enjoys nearly two years of freedom and has been making positive changes in other aspects of his life as well.

Do you have any idea what emotions exist for an addict in need of a fix?

Imagine with me something really quite scary (I want to apologize to anyone who either knows of someone or was personally involved in a tragedy similar to what I share.  This is the closest example I have found which relates to the real feelings that exist in the life of an addict).

Think of what you would do if you were trapped, or held against your will underwater and unable to breathe.  Initially, your reaction may be anxious curiosity seeking different methods available to free yourself.  Now, sense the anxiety you would feel as the body grows short of needed oxygen. The intensity of your actions elevate in severity as your body fades because you are unable to breathe.  Finally, as you become aware that you have limited consciousness, you quickly come to the realization that you will do anything to free yourself.

A similar real life example was the story about Aron Ralston who was trapped with a boulder pinning his arm against a rock wall in Southern Utah.  He eventually freed himself by cutting off his arm (this story was captured in the recent movie 127 hours).

This is the best example I can share of what an addict feels as their body cries out in need.  Over time, and as the individual becomes tolerant of the chemicals, the addict needs an increasing amount to sustain the high.  As the dosage increases, the need for money escalates eventually reaching an unsustainable level.  The addict, held underwater, seeking their form of oxygen; now begins to do things they would never consider in their normal state of mind.

My desire is not to get into the rights and/or wrongs, the why’s, how’s, or even suggest anything that might place judgement on those in life who have fallen to a place marked with this level of desperation.  I will simply suggest that if we who don’t understand these inclinations, it is difficult for us to have any idea of what some of our fellow human beings suffer with, or why they do things that are unusual to their character such as theft, lying, cheating, or treating loved ones unfairly.  Let’s just say, they are held underwater against their will doing anything to survive.

Life for them is on a steady downward spiral, just as scary to them on sobriety as it is to us, yet when their need arises again; logical thought is quickly thrown out the window.  And just like Alex, they become victims of the need for the next high, alter their character to survive, and then victimize whomever they must to fill their addiction.

If this is true, how then do we help our loved ones overcome this seemingly insurmountable hurdle?

Understanding, forgiving, and loving any individual who is suffering is a start, yet an intervention through some type of life altering event is critical for a permanent change of heart.  The reason I shared the story about Mary and Alex was to identify what extremes may need to exist for this life saving transformation.  If we are unable to find a place where the individual truly wants to change, unfortunately they may never do so even with all the caring in the world.  This disease will eventually take these dear peoples lives.  I have been witness to this far to many times.

Before gaining my interest in helping individuals who struggle, and now having had many positive experiences with people such as Alex.  I can see the triggers needed in good peoples lives who are internally reaching out for a life saving arm.  If you know someone in need, understand they are desperate for your help.  It may not seem like it at times, often you may be offended as they reach out for air, but never forget they really do need you!  Make yourself available with unfailing love.  Commit to their well being no matter what may happen.  Become the Mary in someones life…

This entry was posted in From friends and tagged addict, addiction, saving a life, serving, unconditional love. Bookmark the permalink.