There are going to be “Mormons” at the…!

This comment was given as a response to an event in which I am to be participating in over the next few months. It really shocked me, no, literally set me back on my feet as I am one of the “Mormons” to be in attendance and obviously to be watched out for. My bewilderment isn’t limited to what this suggests about me personally, but it also came from what I would 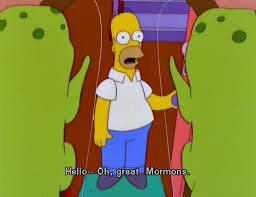 think is an educated individual as well. I’m writing today not because I am a “Mormon,” or that I feel a need to defend my faith, but because of the larger issue of the need for equality found within any healthy society.

Visualize with me for a minute how very odd life would be if all of us were nothing more than mirror images of each other. I frankly enjoy the incredibly diverse group of people I consider friends, associates, and family. From this diversity I am a far better person than I could ever be if all I did was “hang out” with people just like me. Most of whom I find myself with, I wouldn’t be able to tell you what (if any) faith they were a part of. Those religions I do know cover nearly all spectrums. I know faithful Christians in many denominations, Buddhists, Hindus, and a Medicine Woman; followers of Islam, Judaism, and Baha’i; some who are agnostic, some who are atheist, and a man who believes he is a religious leader reincarnate.

As a moderate conservative I have very close ties to highly liberal friends, independents, and some libertarians. Having lived in foreign countries, I have friends who don’t enjoy freedoms as we do living in a republic. While not a minority (though being a red head should qualify someday), I have friends and family who are white, yellow, red, brown, and black—I happen to be sort of pink myself. I hold a graduate degree yet have friends who enjoy all levels of education. As a middle-aged man, I find myself actively engaged with people of all ages. While I subscribe to a heterosexual marriage and relationship, I have many friends who elect a differing lifestyle. Having been raised by a working (executive) mother and by having three daughters, I have always advocated for diversity in the workforce. And finally, having lived abroad, I have many friends who originate from a variety of nations.

Why do I say this? Well, I have never judged an individual based on their faith, political leaning, race, education, age, sexual preference, sex, or national origin. To be judged by my faith prior to ever meeting an individual and one who will be attending an upcoming event is quite odd for me. I know that this type of prejudice isn’t unusual and is slight in comparison to what many deal with. However, Mormonism is something I wrote about in pieces on Mitt Romney during the presidential elections. Mitt was criticized as he ran for president for his faith. Mormonism is clearly misunderstood in some circles; however, I find it odd to label individuals based on generalities, particularly when they are not factually based. How would my Catholic friends feel if I held a bias toward them because of medieval witch hunts? How would my Islamic friends feel if I prejudged them based on radical jihad? How many friends would I have never had if I were so close-minded as to not want to associate with people of a different faith, political view, race, education, age, sexual preference, gender, or nationality? Very few—possibly none! It is something I can’t even calculate due to lack of information. My life’s history is written by the diversity of my friends and family.

As a world society we must recognize the beauty of our diversity. We must respect and value our differences. In doing so, we all will realize our full potential which will promote inclusion. This is one Mormon who appreciates his religion, which at its foundation has taught acceptance in honoring a God who is no respecter of persons. I am an individual with many unique features, and until you meet me and get to know who I am or what I represent, please don’t show ignorance by labeling me with your perceptions which I know you will find misguided as you learn who I am below all the labels you may place on me.

This entry was posted in Life and tagged diversity, equality, mormon, prejudice. Bookmark the permalink.