You will not believe what happened to me!

It seemed as though it would be a normal flight as things started out. We were on our way to Florida. I don’t travel a great deal, so I was a little nervous and carried a higher level of curiosity as I approached the airport with Mom and my Sister. I typically enjoy people watching, but in an airport environment it seems to have a deeper meaning. What is fun in observing body language, or human interaction while shopping at the Malls really changes in the backdrop of your mind as you overlay the threat of what the government has done to protect us against terrorism.

We were hurried, which isn’t entirely abnormal for our family. However, today it was due to a forgotten carry-on bag. I was to stand by at the “drop off” zone waiting for my Dad to then rush through security and onto the plane. The gate personnel were fantastic in offering to help, but their “we will only wait five minutes” put pressure on the situation. Dad made it, I ran, and things worked out with merely seconds to spare!

I can’t say I have ever been the last person on a plane before. This 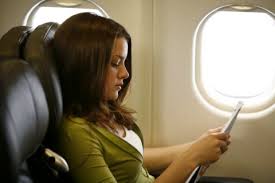 was an unusual situation for me as it seemed as though all eyes were on me as I walked down the aisle to my seat? Granted, I have both sat in my seat wondering who would be joining me, as well as looking for who may be next to my seat as I walked toward my row. I laughed internally thinking of the thoughts that were possibly running through passenger’s minds. “No, please don’t be the one sitting next to me,” or “That person looks interesting, I wouldn’t mind sharing a few hours sitting next to them.”

I spotted my seat, funny thing it was one of only two seats I could see without people sitting in them. The row in front of me had a vacant middle seat, which was book ended by two Middle Eastern men. I am confident that I carry no lasting biases toward people, but as Morgan Freeman recently stated, “We all have biases, and no matter how open-minded we think we are, stereotypes color our judgement of others, and can lead us badly astray.” I didn’t know how much this would prove to be true for me, which soon became magnified as you will see.

After sitting down and enjoying small talk with those I would be joining on our flight, a gentleman appeared from the rear of the plane taking the vacant seat in front of me. He, at quick glance seemed to be a party to the two gentlemen sitting on his row. Normal flight conditions continued with no further thought of my surroundings. As we reached cruising altitude, the man in front of me pulled out an iPad. I hope I am fairly normal in my action? I peeked to see at what he was doing. “SHOCKED” and scared couldn’t even begin to describe my feelings as I saw the screen. Emotion immediately validated my impulse feelings from having witnessed who was sitting near me. On the screen there was dialog and diagrams on what to expect from passengers and flight staff in the event of threatening terrorist’s actions.

As he surfed through differing educational pieces of studies on overtaking planes, what-to-dos, and how-tos, my mind began to race. It  barely kept pace with my heart rate! I was bouncing between end of life thoughts barely managing to keep it together, and ways I could “save” us from these evil doers. I imagined myself jumping from my seat screaming for help as I tackled any one of these men in their attempt to do anything that would cause harm. I thought of other methods of interaction such as silently approaching the flight attendants, or who nearby may be able to help. I wondered if there was a Marshal on-board and who it may be. My Mom was sitting on their row across the aisle. I did my best to have her check to see what I was seeing perhaps to help or maybe even validate my predicament.

I thought of the life I lived and how blessed I was; while believing I still had much to live for. I wanted to write loved ones good byes expressing my love and gratitude as my eyes began to fill with tears. Then out of nowhere, as I was in this mindset; the gentleman in front of me began surfing through his family pictures! I thought—this is it, game on— he too is saying his last goodbyes as he prepares to overtake our flight.

With emotion now at a pivotal high, and prepared for action with adrenalin flowing through my body; my life and excitement took a complete turn. One I wasn’t really prepared for, one that came so quickly it was as if I had blown up like a balloon with confetti falling all around me. Contrary to what you may be thinking. I wasn’t called to act on any of my plans, I was so filled with immediate joy of which I can’t even begin to share the feelings I experienced.

Right in front of me, the flight attendant stopped and engaged with the following conversation. “Captain, how has your flight been? Not bad, I have taken the time to prepare for my terrorism course and am now relaxing thinking of my daughters upcoming birthday. Oh, great, please let me know if there is anything you need?” The captain responded that he was okay, and excited to be able to travel home with friends.

Oh my! Have you ever been so filled with emotion that you are operating on auto pilot? To then fall into complete comfort and satisfaction! It is two complete opposite feelings occurring nearly simultaneously. I hope you will agree, my feelings were completely reasonable; maybe understandable, however— yet so far from reality— that I could only sit in joy and amazement.

As writer of this story, my question is merely this: Aren’t we all found in circumstances of misunderstanding every once in a while? I find no fault in the reactions or potential actions felt or planned by this young woman. Our instincts are needed to prevent unusual circumstances from becoming harmful to any of us. We need to be on guard for the times our instincts can assist in overcoming evil intent. I share this incredible story to prove a point. We bring to the world our own perspective lined with how we see the world. To gain appreciation of any situation, we need nothing more than to be open to what the big picture shows us; while understanding it may be different than we once believed…

This entry was posted in From friends and tagged bias, makes sense to me, misconception, prejudice. Bookmark the permalink.

1 Response to You will not believe what happened to me!