Could bad be good in disguise?

The first call of the day was from the Bureau chief with an assignment of a lifetime! Don Derby had waited since childhood to hear the words, “You are assigned to the home baseball game tonight.” Don grew up believing he could be the best reporter to ever cover sporting events for his local community and this was the chance to prove it.

Don studied the visiting team; he was already well versed on all local sports and their players. Tonight’s game would put the victor in first place with the season coming to an end. As would be expected, Don got to the ballpark early with pen in hand and began interviewing. His interests were to find stories on pre-game emotions. As the players disappeared into their locker rooms for last minute strategy and pep talks, he walked up to survey the press box insuring optimal seating for observing the game.

The players within minutes re-entered the field, the crowd had arrived early wanting to chant team fight songs and settle in their seats with popcorn and treats. Being distracted with excitement, Don had missed an unusual storm approaching which was moving quite rapidly. No one seemed to care as all were excited to see a great game!

The national anthem played as the teams eyed each other trying to gain any advantage they could. The wind picked up as each team headed to the dugouts to quickly return to the field with their equipment. Rain hadn’t started, but it appeared as though it would 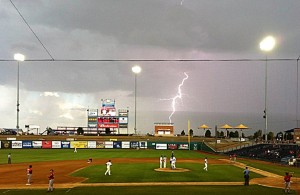 soon. Out of nowhere, and as the first baseman ran to his place on the field, an incredible lightning bolt shot down  over the right field just before the parking lot.

This created an intense upheaval among the crowd with players turning and heading back to the dugouts. As the first baseman reached his position a second bolt snapped from the sky hitting him squarely. Words will never be written to accurately describe the shock of all who witnessed this terrible event. As quickly as this storm came, rain began to fill the skies as emergency crews responded to the player. He wasn’t moving at all, they immediately carried him off to what was thought to be cover of safety. We learned over the radios that he had died. Naturally the game was cancelled as many walked around bewildered wanting to understand.

Don stayed wondering how something like this could happen. As the last of the stadium employees where leaving, he too walked out for home. It was late; he decided to retire without dinner. Restless and unable to sleep with thoughts racing through his mind, Don lay staring at the ceiling. Oddly, the phone rang. It was Mr. Rogers, the bureau chief.

Don, I haven’t seen your story, we need to go to print soon, where is it.

Story? There was no story, didn’t you hear? Dave Checketts the first baseman was hit by lightning and killed; they called the game.

No story? Are you kidding me? A player was killed and you say you have no story?

I guess I didn’t think of it like that, you are right.

No story, you witness an event unparalleled in history and say, “There was no story?” Sorry Don, you’re fired!

Dejected, Don sat shocked knowing what his boss meant and understanding how stupid he had been. He was so caught up in the moment believing his story was the game, that he missed a–once in a life-time–chance to report on a sporting event of the greatest human interest. His life went from that of being the best day of his life to that of the worst in hours. Upset he maneuvered between self-pity and the devastation of the loss his community felt as one of their heroes had died.

Don finally fell asleep awaking around noon which was highly unusual. He pinched himself to learn if he had dreamt this and if in fact fired. No such luck, it was true; he was unemployed. Things never really changed as job after job was denied within the industry. This was Don’s dream job and a stepping stone to greatness, or at least that is what he thought…

Within weeks, and through connections made while in school, doors for employment began to open in a different industry. He was hired as a writer for the Chamber of Commerce. This lead to a life with a career of having served as the President of the State’s largest Chamber where he traveled the world, met all types of government and business leaders, and became the key component to his community receiving recognition as one of the best places to do business in the world.

On that dark night and for some time thereafter, no one would have ever convinced Don that being fired was the best thing that would ever happen to him professionally. Much later and as he reflected back to that day, he realized how critical this step was for him to find his passion. He would often tell people who were feeling disappointment, “Today you might not understand, I promise that if you remain positive, one day you will see this turn in life came for a reason.”

We often get caught thinking small or limiting ourselves to the now. When life’s paths don’t seem to be taking us in the direction we want, maybe, just maybe they are headed right where we are meant to go. Be aware in times of difficulty, we well may be on the road to greatness simply misunderstanding the steps which need to be taken along the way.
Jaren

This entry was posted in Life and tagged appreciation, healing, time, understanding. Bookmark the permalink.