One of Life’s questions answered

As the years pass, I become more and more intrigued by history. This fascination spreads into current happenings as I witness history in the making through observation of modern day events. I am a man of faith, subscribing to a religion filled with a history of involvement with persecution; often held at the hands of mobs.

Every time I hear stories of suffering, I cringe at the pains that both individuals and families must have felt. I know there is no way for me to truly understand, but I feel as though the agony was unbearable! Music often has a way of piercing my soul at a deep level. For example, when I hear the words of a hymn written by early pioneers 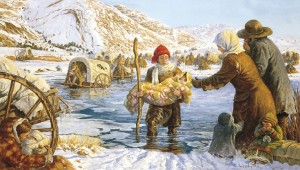 “Come, Come Ye Saints,” I feel an emotion which may be closest to understanding that I can get. “And should we die before our journeys through, Happy day! All is well?” Imagine reaching a point of believing death provides happiness!

As I look back, I have never understood how groups of people could get so angry, or commit such atrocities. Quite frankly every story blew my mind. I would read of how distant the feelings of the mobs were from the reality of those being persecuted. How could that happen? I would ask. Then, like the music ringing through my heart, I found a spiritual wakening to the long unanswered question (Oddly enough, my wife joined me in this same discovery, which was unknown to each other at the time it occurred).

As I share this story, I want all to know that I don’t for a minute think my story remotely reaches the level of the persecution I have referred to above. It is only the feelings felt much as in the music of the hymns.

Recently, and for a time, I felt the pains and misguidance of mob rule. I learned how one deviant soul filled with darkness and unhappiness can strike out; directing the actions of a group fueled by inaccuracies. I saw how through peer pressure–not all believed–yet followed in fear. I learned that through deviant technique, truth was pushed aside and replaced with distortions and exaggerations. I realized it was emotion that moved the masses and it needed to be maintained. I learned how necessary a departure from facts was and that a tool used was constant and relentless defamation; even at the admittance of offering incomplete and unverified information. I sorrowed knowing the hearts willing to share truth were silenced merely to vindicate hatred. Sadly, I realized it only took one who lives without conscience to pull well minded people into the pits of loathing. At the pinnacle, hearts hardened, minds closed, and good people lost sight of why they even collaborate. Some follow not even knowing why.

At the very same time and at the height of upheaval; my wife and I turned to one another sharing shock at how off base and violent civil people easily become. We talked of certainty that this is how groups turn on others(blameless people). No longer did we wonder how throughout the history of the world evil overcame the innocent. Our questions of how mobs form to crucify, martyr, obliterate, or assassinate no longer occupied our hearts. It was as clear as one can feel without having to witness an event at this level. No, I’m not a pioneer who received persecution, yet the hymn they sang filled my heart with a clearer understanding of their plight. No, there isn’t a comparison of the actions taken against me to those who have met their deaths standing for what they believed, yet the persecution I received filled my heart with a clearer understanding of how mobs perform our world’s greatest atrocities…

This entry was posted in Life and tagged history, incivility, misunderstood, mob rule. Bookmark the permalink.

1 Response to One of Life’s questions answered