There are many things we remember as we go through life’s journey. The most vivid for me are the ones that carried a little extra emotion. My hope is that we as females aren’t alone in our ability to summon up these memorable times like the one I will share.

The parade group asked us to share something about our experiences at their show. This immediately brought back a myriad of emotion for me. My family first started going to the parade when I was in middle school. I still go to this day years later. The parade has become a tradition as I plan for it each year.

In my senior year of high school I met and began dating a boy who was in my English class. We had known about each other throughout our earlier high school years, but never really talked or met formally. We had an assignment which required a small group of students to gather after school. Brian was in my group. I will say I fell head over heels in love as I began to understand more about him.

Class ended, we had some contact, but Brian is fairly shy (or really shy) and I don’t need to say what this meant. I could see he was finding ways to be in places where I was at school events, but no formal invite to date was extended. Brian’s friend began dating my friend which is where it all started. This was a good enough reason for Brian to suggest we go out. I assume he was comfortable I may say yes. We double dated for our first date and began finding ourselves together more regularly as the school year ended.

Over the summer we saw each other, but each of our family trips was offset so we had gaps in being together regularly. As I have said, my family goes together to the parade of homes. What I found fun is that Brian’s did too. For a date, Brian suggested we take our tickets and see some of the homes we each had missed.

It was in our last home that night where my memory was created! We had seen about six 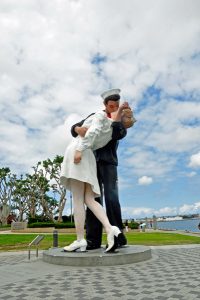 homes and were nearing the closing of the homes for the day. The last one was exactly what I had dreamt about my entire life. As we walked through the home I could see myself living there forever. I mentioned this to Brian as he turned and kissed me! It was amazing making me feel the whole experience differently. Brian on the other hand had acted on emotion and was embarrassed to death. This made it even better.