I know, Peppy Suzie Prom isn’t a typical name for a Stallion, but his linage was so strong this unusual title only added to his strength. Peppy was born to greatness! Many stood by anxiously awaiting as they prepared to reign in one more king; a champion of champions.

Life didn’t go that way however; you see Peppy was born much smaller than his father. The expectation of an 18 hand giant fell to guesses of 14 or maybe 15 if lucky. Those who lined up to gain favor, suddenly turned looking for other opportunities. Weeks turned into months as Peppy began to wonder where all the attention had gone. Where would life take this strong heart bound in what was assumed to be a detriment, a smaller than typical body?

Then, almost as a last ditch effort, the thought of putting him up for auction became a viable solution. This was the time two incredible paths crossed. At the auction that day were several trained horse women from Sage Creek Equestrian. These ladies were trained to

see talent. Size never mattered to these experienced cowgirls for they well knew there are a variety of sizes in our human riders.

Among these exceptional women was a champion too. Not necessarily one found in riding. Her talents came from a much different sport. She led cheer squads having been crowned champions at every level. As Lindie’s eyes met Peppy’s it was as if two hear 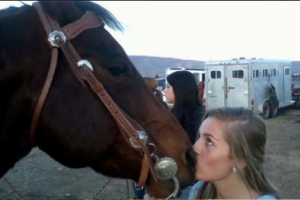 ts aligned from another time. Each was feeling deep within this was meant to be and there would be a history created together.

What had been seen as a flaw in finding a home had now become the greatest asset. Lindie by stature was the equivalent of Peppy. If she topped 5’2” it was because she stood on high heels. As they would train, all who watched quickly realized the magic these two would develop together. Peppy had the blood of champions; Lindie carried the fine tuned skills of a trained competitor. Each stood up for the challenge creating magic as two bodies flowed into one. It was destiny! It was a perfect manifestation of two top athletes expressing themselves with impeccable precision.

As they grew from adolescence, they taught each other invaluable life lessons. Certainly, 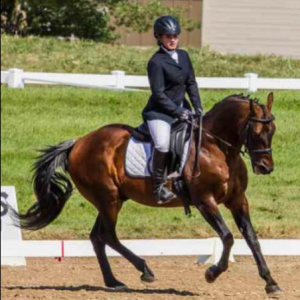 titles were won. Yet these were nothing more than steps on a path each was willing to take because they played as hard as they trained. The important stuff was where

Peppy would step in as life got tough; he was the best listener and it meant the world to Lindie!  In trade, Lindie would care for the needs of her friend. Often, and as each knew, no one could quite understand life as they understood it together. Every time Lindie would arrive at the equestrian center, Peppy would show his excitement—standing at attention—running to the nearest fence. It was these times together both the human and equine enjoyed thoroughly.

This wasn’t the only place the two would connect as each could feel of each others needs from a distance. Lindie could feel when Peppy was in need as he could sense when life may be presenting some concern for his friend. Time passed, each got older and as they grew, so did the requirements of maturity making time much harder to be together. The connection remained, their love never ended.

Yesterday, Lindie felt her heart strings pulling. They were drawing her to her horse. She knew with certainty her friend was in need. Peppy lay on the ground in pain, age comes quicker for equine and he must have felt he was nearing the end. He had learned that when he sent out a call; Lindie would shortly come. With anxiety Lindie headed out across the mountain pass hoping with all her heart she could answer the call. As she drove onto the property, the spirited arrival wasn’t the same. It was clear Peppy was happy to see her but his actions were nothing more than a simple acknowledgement. A glistening in his eye or as seemly impossible; a sign of comfort on his face. As Lindie approached, a great relief was evident as Peppy’s heart moved from the pain toward their love feeling relief in her presence. It was as if he were saying, “I’m so glad you’re here! I really need you; I think this is the end, please hold me.”

These two hearts were speaking a language neither had known before. Peppy laid down, Lindie placed his head on her lap and they talked about little things. Things such as growing up, or how their relationship had played such an important role in each other’s lives, they remembered the good times together. Some brought tears, yet others a slight laughter even though the pain of age was penetrating their hearts. Peppy knew he only had minutes and Lindie could feel his discomfort. While she knew how much fun he would have cantering across the sky, nothing would ease the pain of thinking he would be gone. It didn’t seem fair, nothing could be done. Please Peppy, stay with me; let me fix you!

No, it is time Lindie; let me go. I have had the most remarkable life; a life of a champion! I will be there for you when needed, I promise.

A few more words were said, hearts touched and a few more memories shared. Peppy, before you go, let’s go somewhere comfortable, a place we shared together. With that Lindie got up making a gentle motion to come. Peppy with every effort of any energy remaining got up and began his voyage. This miracle was an indication of deep love; you see Peppy hadn’t been willing to move for anyone else.  Yet as he struggled —nearly failing—all could see he wanted his last minutes to be those that would be meaningful to his friend. His love trumped physical limitations as he moved ever so slowly. They walked together onto a grassy knoll, Peppy bent his neck smelling the new born grass. Then raised his head as the warm mountain breeze blew across his mane. He gave Lindie one l

ast glance, a wink of gratitude if you will and took his last breath.

It seems as though nothing is harder in life. Then as many were feeling the void; a new stallion stood tall offering the loving support so often given by this amazing lost friend. No, Peppy can’t be replaced but certainly his legacy can be added to…

This entry was posted in Life and tagged my friend, my horse, my love, Peppy Suzie Prom. Bookmark the permalink.