The Secret of Civility

More so than ever before our society is placing people in boxes; boxes of us versus them! Our influence comes twenty four hours a day from technology that is bombarding us as it carefully places our interests into pigeon holed entertainment. The way we see the world becomes more extreme as we bathe innocently in data designed to attract us. Seemingly like minded people fuel the energy gained by finding and sharing support material. Some information comes from imprudently designed falsehoods portrayed by companies/people who don’t even exist. 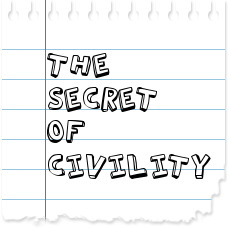 These boxes we separate others into can be the go-getters vs people who are struggling, people we trust vs those we avoid, groups unknown vs neighbors and friends, cowboys vs individuals who haven’t seen a horse, people who hold religious faith vs some who avoid organization. The current political environment seems to have added to the growing division. Our boxes become more extreme as political factions occur whether it is party affiliation or cause of individual preferences in debates on global warming or as seen today in discussions of gun control after the horrific tragedy in Las Vegas.  These boxes can be personal with issues based on race, gender or sexual orientation.

We blind ourselves to life as we label individuals or groups believing they are foolish for having their beliefs. After successfully placing people into boxes, we remove their humanity striping ourselves of ability to understand or enjoy an empathetic heart. We no longer believe “these people” could add anything of value to intelligent conversation. As we seek to find ways to either validate our belief or rebut their opinion; we build up fortresses around the boxes we have placed them in. Incivility grows and we gather into groups to fight against the thoughtless actions of those we now sense we are against. The greatest box becomes us vs them. What may have been seen as unkind, uncaring or selfish actions on our part become needed defenses protecting us from the enemy!

What would our world be like if we could see through clear eyes and open hearts to the things that tie us together as human beings; rather concentrate on differences? What if we sought out those things we have in common; or at least could see people as human or caring?

Fact is some found in these separate boxes are members of our family. My Aunt—who I consider a saint—would become my mortal enemy if I held no understanding of our commonalities. Our differences are stark: conservative/liberal, Agnostic/God fearing. If we didn’t share a deep conviction of love that comes through understanding hearts, our placement in boxes could suggest the value of our relationship would never exist, and we would never advance in learning from each other’s experiences. If we engaged in physical or verbal assaults blindly supporting our perspective; we well would be astonished to run into each other on the battle front representing opposite sides.

What if we placed all the boxes existing in today’s discussions into a large stadium with direction from a moderator engaged to find our commonalities. The announcement would come across the sound system, all who love the outdoors step over to the north ten yard line. Some from nearly every box would leave their group and move toward this location. There would be no separation of race, ethnicity, nationality, disability, religion or political opinion.

As you read this, did you think to yourself there are people in some boxes who don’t love the outdoors? If so, let’s keep breaking down the walls. Remember back to a time when foes became friends. In Utah we united as a citizenry when Salt Lake held the 2002 Winter Olympics, America united behind individual athletes. Barriers are missing in these times, it isn’t always sports; we break down walls to help in times of need. Think of a time you remember a small or large group unite in a time commonalities were prominent.

Still have doubt? Now the announcer says all who love dancing step to the 15 yard line, those who are broken-hearted to the twenty yard line, lonely twenty five yard line, madly in love thirty yard line. Are the barriers breaking down now? All who have saved a life thirty five yard line, been saved stand in the end zone. Those who have lost a loved one to the sideline, step parents to the goal post, those who are afraid to the center, and those who are addicts/family of addicts join those who have saved a life!  In each of these areas we will see that what had been thought mortal enemies are standing together talking about commonalities in all shapes, sizes and color. No longer are we us vs them. We are the human race filled with kindness, empathy and dreams. We all want to make the world a better place with new and ever changing achievements.

Our world could be a beautiful place if only we could see that there are more things that bring us together then we think!

This entry was posted in Uncategorized and tagged civility, Facebook, incivility, political divide, the secret of civility, youtube. Bookmark the permalink.