Yes- I was left alone for a time…

When I was a child, I attended the Parade of Homes with my family and our neighbors. Each family had their own car. Initially we all traveled in our separate vehicles. As the day went along, we traded children riding in the cars so I could be with my friend and my sister with hers. It wasn’t uncommon for us to trade between cars depending on who came out of the home first.

It was in about the fifth home of the day we were having conversations about getting some lunch before the next home. I was particularly fascinated with the backyard which had the best play area I had ever seen. What I didn’t notice was that I was engaged with some that weren’t part of our group. Time must have flown by for me.  In my excitement soon I realized there wasn’t a soul around who I knew. 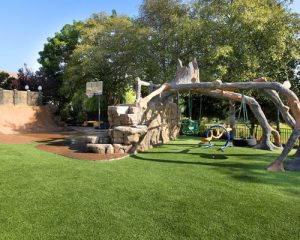 Anxious, I went through the home toward the exit looking for any sign of my family or the neighbors. Nothing! I went out front and down the street to where we had parked. Nothing! No cars and no family or friends to be seen. Many might not know there was a time we didn’t have mobile phones, but this was the old days and we didn’t.

At first I thought to just sit on the sidewalk where the cars had been parked, but I soon realized I was out of place there. I went back to the home and sat near the front porch.

My family and neighbors each thought I had gotten in the other car. It wasn’t until they got to the restaurant they realized someone (me) was missing. My mom tells the story that she not only thought I was in the other car, but that I must have gone to the restroom first and why I wasn’t there to order.

After a short time my mom asked if the neighbors knew where I was concerned it had taken a little more time than normal. The response shocked my mom as she heard, “no he wasn’t with us; didn’t he ride with you?”

Well, back at the home and for what seemed like an eternity, I had made a friend with the person at the door. She told me not to worry and that as soon as either group realized I was gone they would be back to get me.

Mom jumped in the car racing back to save her son. What I will never forget is her eyes as she quickly drove up near the front of the house. She was wide eyed and filled with concern until she saw me. When she realized I was OK, her face changed portraying comfort that extended into my heart. The ensuing hug is one neither of us have forgotten.

Needless to say, we had greater restrictions for the remaining homes. I have been every year since and love the parade.

This entry was posted in Business and tagged home show, Parade of Homes, salt lake parade of homes, showcase of homes. Bookmark the permalink.