During a recent phone conversation with a good friend of mine, my friend expressed his excitement over being able to watch the UFC (Ultimate Fighting Championship) this weekend. Instantly, I 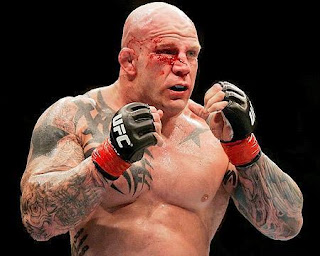 expressed my displeasure for the sport. Suprised at my response, my friend shot back that I needed to get more in touch with my masculine side. After much debate the argument became more a discussion about manliness, and what it means to be a man because somewhere, somehow UFC and manliness are connected.

After the course of the conversation had run and neither had changed the other’s opinion, I decided to pull the God card out. W.W.J.D. (What Would Jesus Do)? I hardly believe that Jesus would be the type of man that would chose to embrace such a sport in light of much greater needs in the world. But I also believe that God does believe in developing talents – so long as those talents do good in the world.

Because there was much debate on both sides, I now ask you, the readers of the Jaren Davis Blog, “Who’s the Man?” And what discipline of masculinity is defined through their actions?

This entry was posted in Uncategorized and tagged Jesus Christ, Manliness, UFC. Bookmark the permalink.

6 Responses to Who's the Man?